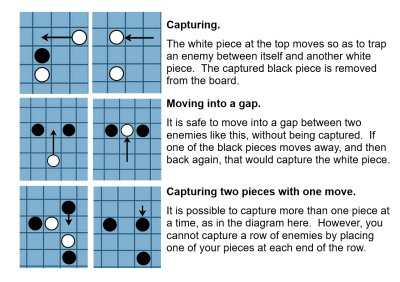 The longships (but not the treasure ship) may capture enemy ships. You can capture an enemy longship by surrounding it on both sides with two of your longships. This surrounding must be on opposite sides, either front and back, or left and right, that is, orthogonally, not diagonally. When a longship is trapped between two enemy longships by an enemy move, it is captured and removed from the board. However, a longship may safely move into a gap between two enemies, without being captured. It is possible to capture two enemies with one move, but you can't capture a row of two or more longships by bracketing them at both ends (see illustration).

The treasure ship is different from the ordinary longships. Although it moves the same way, it can not participate in capturing enemies – it is “unarmed”.

However, the treasure ship is stronger in defence than the ordinary longships, as it requires four enemy ships, surrounding it on all four sides, to capture it.

The end of the game:

(*optional extra rule: Black also wins if ALL remaining white pieces are enclosed in an unbroken chain of black longships)

The game may also end in a draw, if a sequence of perpetually repeating moves happens, if either player is unable to move on his turn because all his pieces are immobilized, or if both players agree to a draw at any time for any other reason.

For the white player: As with the 9 x 9 version, it is important for white not to let the king become separated from his escorting longships. Try to find moves that open passages for your treasure ship, while also attacking enemy longships at the same time.
For the black player: It is important for black not to leave any open (unoccupied) ranks or files, and to try to form diagonal chains if possible. Be very careful when capturing a white longship, that you are not opening a path which would let the treasure ship escape.