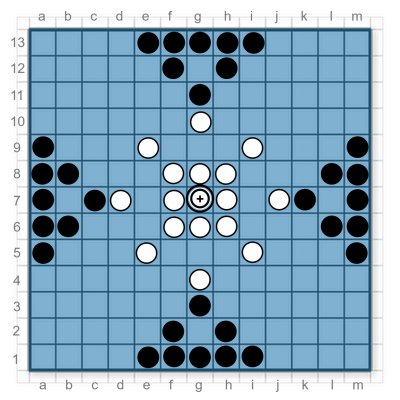 13 x 13 hnefatafl boards have occasionally been found by archaeologists, inspiring modern tafl players to experiment with different rules and starting positions for this size of board. It is clear that rule sets that work well on one size of board do not necessarily work so well on other sizes. 13 x 13 boards tend to feature edge tafl rules, that is, the king wins at the edge of the board rather than the corner. This version incorporates an unarmed king (or “treasure ship”) which is captured when surrounded on 4 sides, just like the 9 x 9 version.
In tests, this variant has been proven to be very well balanced indeed. The starting position featured here (proposed by board-games expert David Parlett) is highly interesting and dynamic, and results in fast-moving and exciting games. It is also a quick and simple variant to learn, as there are no special squares of any kind.

Aim of the Game:

(*optional extra rule: Black also wins if ALL remaining white pieces are enclosed in an unbroken chain of black pieces)

All the pieces, including the treasure ship, move the same way: in a straight line, forwards, backwards, left or right, any number of squares. It's like the move of a rook (or castle) in chess. No piece may move diagonally, or jump over another piece. No more than one piece may occupy a square.

There are no special or restricted squares, so any piece may occupy any square on the board.

The black player always has the first move in the game.