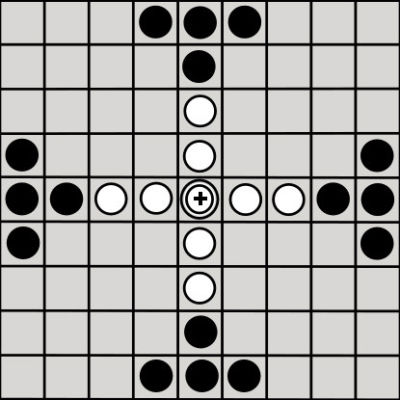 “Longships” is a board game based on the ancient game of the Vikings known as “hnefatafl”.

It is a game for two players, played on a board of 9 by 9 squares. One player takes the white pieces which start in the centre, and the other player takes the black pieces, which start at the edge of the board. Each player has several ships to command – white has one treasure ship and eight longships, and black has sixteen longships only.

2. Moving:
All ships move the same way. Forwards, backwards, left and right, any number of squares.
No ship can jump over another ship, move diagonally, or land on a square occupied by another ship.
To begin the game, the black player moves first.

3. Capturing:
Longships (not the treasure ship) can capture each other by surrounding an enemy ship on both sides. The captured ship is removed from the board. However it is safe to move into a gap between two enemies.
The treasure ship can not take part in capturing.
It is possible to capture more than one ship with one move.
However you cannot capture a row of two or more ships.

4. Perpetual moves:
Sometimes a situation arises where the treasure ship moves back and forth repeatedly, forcing a black longship to block it with similar repeating moves. The white player must break this pattern. Otherwise, if the same moves are repeated three times, black wins the game.

5. Strategy tips:
For white: Look for moves which both attack an enemy longship AND clear a path for the treasure ship in the same move. Don’t let your treasure ship get separated from your other longships. Be bold, and be prepared to sacrifice some longships to gain space, or time.

For black: Try to arrange your ships in long diagonal chains, that is the best way to control the board. Try not to leave open files with no ships on them. Be very careful when capturing a white longship, that you are not opening a path which will allow the treasure ship to escape.